SEATTLE — Sports can be an good way to teach kids life lessons, and those lessons don’t need to be on the football field or soccer pitch. A popular local program is using chess to teach children valuable moves in the game of life.

“You get to play other people and you don’t know their strategies and it’s a little challenging, so it’s exciting and fun,” one player said.

But the game is meant to help kids in the South Rainier Valley battle challenges that are not so black and white. The community has seen murders, gang violence and drugs. One of the things chess teaches the kids is that every choice has a consequence.

Bouldin started the program with grant money and about 16 players. But it didn’t take long before kids were lining up to play.

“I had to put chess boards on the ground on the floor for them to play,” she said. “It was such a success.”

The program is open to kids 7-year-old and up at the Rainier Beach Library.

What did Benjamin Franklin Have to say about Chess?. 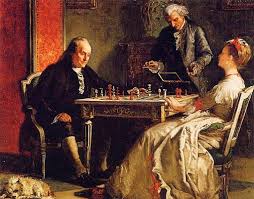 “The Morals of Chess”
Modern Paraphrase
From Wikipedia, the free encyclopedia

Playing Chess is the oldest and most universal game known to man; its origins well beyond the memory of history, and it has throughout the ages been the amusement of civilized nations such as Asia, the Persians, the Indians, and the Chinese. Europe has had it for over 1,000 years; the Spaniards had spread it over their side of America, and just now it begins to make its appearance in these Northern States. The game is so interesting in itself that it doesn’t need the incentive of a prize for people to be engrossed in it, and so it is never played for money. Therefore, people who have time available for such activities can’t find a purer game. The following article, written to correct some improper conduct among a few young friends, also shows that its effects on the mind are not just innocent, but beneficial to both the person who lost and the winner.
The game of Chess is not just an idle amusement. There are several valuable qualities of the mind, useful in every aspect of life, that can be acquired or strengthened by it, which can become habits ready to be used in any occasion. For life is a kind of chess game where we often have points to gain, competitors or adversaries to contend with, and in which there are various good and bad events, that are to some degree, due to good judgment or the lack of it.

By playing at chess, then, we may learn:

stay updated with us: